I write every day for a living.

Which is something I only ever dreamed of as a graduate - or even as a kid playing pretend.

When I was a student I scoured the internet for first hand accounts from writers and journalists, hoping for tips and info about how they made it.

So now that I've bagged my dream job writing features for women's magazines I want to pay it forward and jot down some notes about my experience.

Hopefully it will help someone else trying to break into the industry & provide an honest insight into the realities of the job hunt - the set backs, rejections, shitty jobs to keep you going and when to stop working for free. 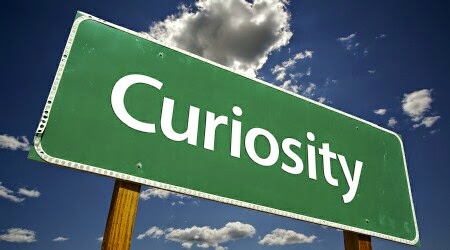 I think my love of the written word started out as a love of reading. Not just books and magazines but scribbled signs in shop windows and notes under windscreen wipers.

So with a combined motivation to read all the things and collect all the stories I developed a bad habit - nosiness.

I wanted to know why the shop was closed, was the owner's mother ill? Or perhaps an electrical fault or staff shortage?

And why would someone leave a note on an empty car? Were they annoyed? Was it badly parked?

It was this thirst for knowledge and a love of stories that helped me in deciding a career path.

I started to take my ambitions seriously aged about 14 - motivated by a miserable meeting with a careers adviser who told me I should be a social worker because I was "friendly" and journalism was a "very competitive industry."

Which it is, of course. But he underestimated my teenage drive to prove the grown ups wrong.

I thanked him for the dream crushing advice but reckoned I had time on my side. So I decided to at least have a punt at my chosen profession.

From there I blagged a space on the GCSE media trip to the local paper. Not an easy feat when I studied drama not media and my tutor thought I was skiving.

But my tenacity eventually paid off... a year after the trip, following 6 emails, 3 phone calls and a visit in person: 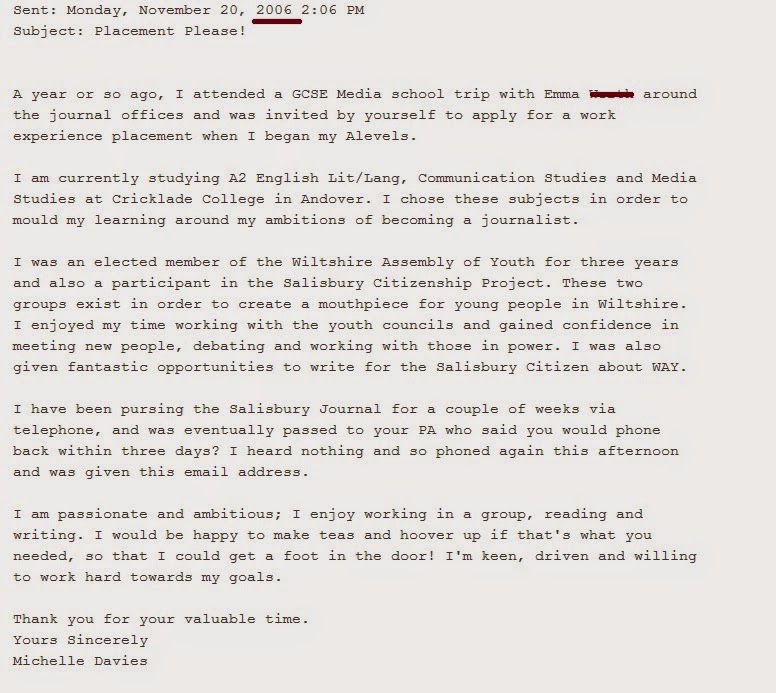 So as well as being a nosey parker I was also a joiner - the worst kind of teenager.

And facetious too: "Eventually passed on to your PA" (!)

Anyway my hounding worked and I was rewarded with a week at the local paper. 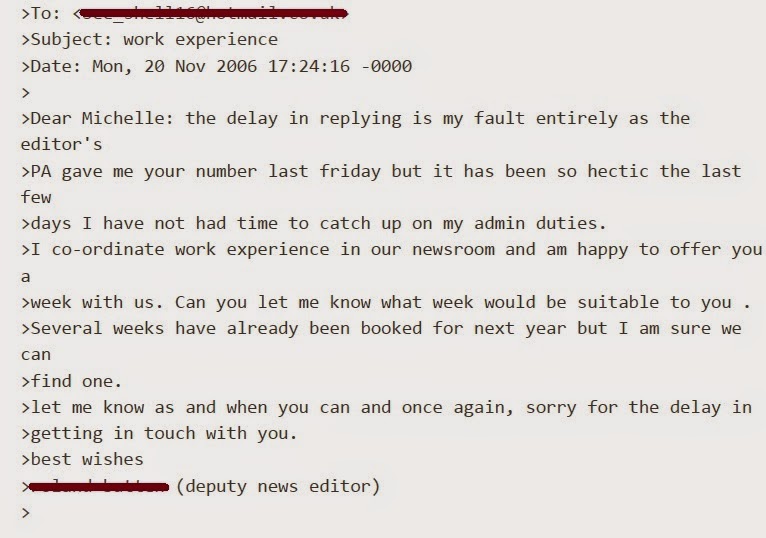 Then yadda yadda, I went to college and studied English Lang/Lit (B) , Media (B) and Communication Studies (C) - completely average grades because I discovered the pub and boys, well one in particular actually but we'll get to him (Darren) later.

In between studying and pub ventures I worked at Pizza Hut and a posh hotel as a receptionist.

Then I chose a university - University of Glamorgan in Treforest, South Wales - and studied Creative and Professional writing.

While at uni I worked as a toilet attendant, a promo girl (flyering) and a waitress.

Then I graduated with a FIRST. Which blew my mind because I spent three years thinking everyone around me was brilliant and I was treading water.

I decided to stay in Cardiff after graduation because I was settled in a flat with Darren and I had a job already which was a lot more than most people leaving uni in the recession. I was doing O.K.

Then the fun began: A Full Year of Dodgy Work Experience

I was a plasma TV copywriter (20p for 100 words or something) , a pets fashion blogger (next to no money), a 'grassroots positive newspaper' intern (free), a student guest blogger on Student Noodles (free) and a writer for *The Sprout and *CLIC too (free).

All the while I was waitressing and applying for jobs I was totally under qualified for and getting some rejections but mostly just being ignored.

Every time I didn't hear back I took a week off from worrying & feeling dejected. Each time I would dust myself off (usually in a bar) and then with a renewed sense of purpose I'd get back to it.

Then came the dream role: 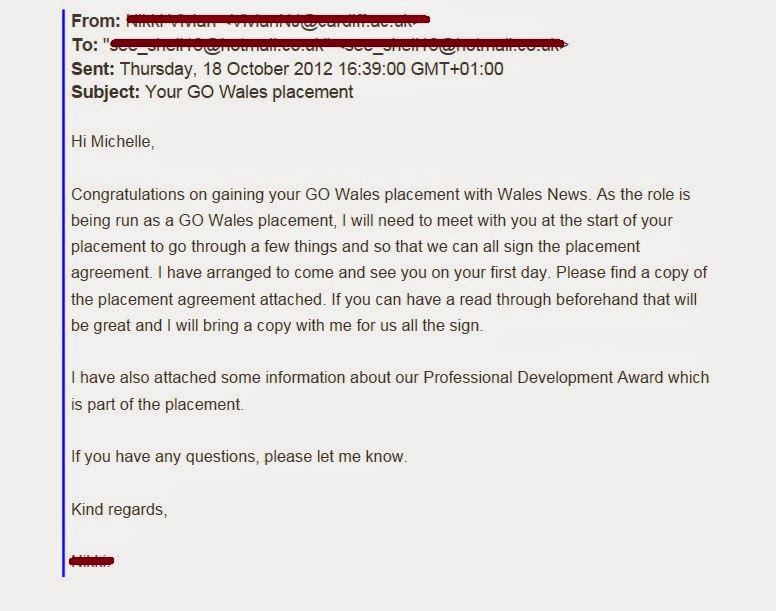 FYI if you are in Wales and a graduate in a creative subject you should absolutely be signed up to Go Wales - go and do it right now if you aren't.

I can't explain how much I felt I needed to get this job as I applied - I just knew it was right.

My waitressing job wanted me to progress and be a manager, I was on the brink of accepting when this position flashed up in my inbox.

I sent off my application and spent the next 72 hours refreshing my inbox and hassling Go Wales for anymore info:

When I then showed up for my interview I was prepared but SO nervous.

I thought I'd messed it up with my weird nervous jokes.

Editor: "What do you know about Take a Break magazine?"

Me: "My Nana says their crossword is the best around."

But thankfully they love a weird joke at Wales News and I was going to fit right in.

So I have been here ever since as a feature writer, writing for most of the weekly women's magazines and features pages of the national papers too.

Every day is different and I've met all kinds of diverse and interesting people.

The lessons I learnt in trying to break into the industry still stand now.

1. Don't give up,
2. Make a polite nuisance of yourself to get noticed,
3. Don't get deflated when the answer is no,

(I know 1-3 are basically the same but they're really important.)

4. Make crappy (but appropriate) jokes all the time (or inappropriate depending on your employer)
5. Fake it till you make it.

And now that I'm a salaried, bona fide journalist I can afford to tell you to only work for free when it benefits you.

I spent far too long agonising over crappy copy about products I didn't care about for a fee of £1.25 when I was starting out.

And now no one cares that I spent weeks writing in a "Vogue style" about pet accessories. It did nothing for my future, my bank balance or my sanity.

So if that's you now and you're sat in your jammers working on something for free that you hate - that won't help you achieve your goals... Stop it and go to the pub. 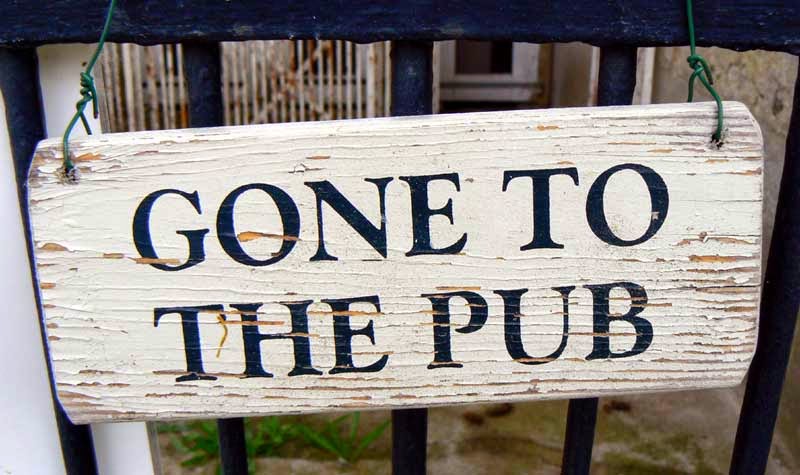 Posted by Michelle Morgan Davies at 10:25 No comments: